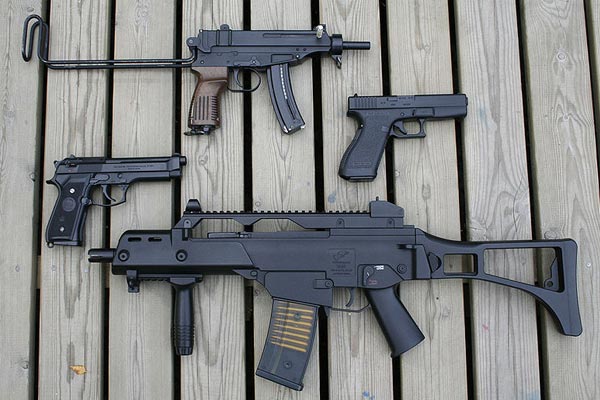 Airsoft guns are a great purchase if you’re looking at some indoor training activity or playing the Airsoft game with your buddies after you gear up. But are these guns powerful beyond their basic usage of the Airsoft game?

Do you think you can break a car’s window by firing an Airsoft gun? Read and find out.

So What are These Airsoft Guns?

So how did Airsoft guns come into existence? Sure, we’ve all heard about the airguns, but why air’soft’?

That’s because they were primarily invented for a game called Airsoft which is just like paintball, but here, you use a different gun with somewhat harder bullets.

In paintball, you shoot at your mates and there will be a clear mark on their costume which helps you identify who got shot how many times.

However, in this Airsoft game, you use a gun which is a replica of a real gun and shoots plastic bullets or bullets made out of biodegradable material.

In this game, you cannot explicitly find out how many times someone’s shot just by looking at their costume and gear.

It’s a game of honor, the participants have to come clean and confess about how many times they have been shot.

Airsoft guns come with ball bullets which are commonly referred to as BB. So these guns have plastic BBs which are very less power and will do only a fraction of the damage a real gun can do.

However, one has to be very careful around these guns as they have the chance of doing damage when one is not in full gear.

Understanding Airsoft Guns and their Technology

Now, to address the question if or whether an Airsoft gun can break a car window or not, one must understand few aspects of these guns—penetration and stopping power, the composition of BB, muzzle energy and the type of Airsoft gun.

By understanding these aspects of a gun, it becomes relatively easy to understand why or why not an Airsoft gun can shatter a car window or break it!

In this particular context, when we’re speaking about the penetration power of an Airsoft gun, we’ll be talking about the first meaning, the ability to pass through the target.

Airsoft guns have relatively weak BBs (pellets or the bullets in an Airsoft gun are called BBs). As they are made from biodegradable resins or plastic, there is a very low likelihood of having a huge penetration power.

Stopping power is the ability to restrict the movement of the target, as discussed above, the BBs used in the Airsoft guns are incapable of causing stopping power of a greater amount, unlike real guns.

As it has been explained in the above point, it can be assumed that the bullets used in the Airsoft guns are primarily composed of plastic or biodegradable resin with a diameter of 6 mm or 0.24 inch and weigh around 0.20 to 0.28 grams.

Few unique models, however, come with an 8 mm diameter. Read this, for further details on the composition of the pellets.

The accepted range of muzzle energy ratings varies from country to country. While the UK is very strict and limits the muzzle ratings to a very small number, the US is a bit more flexible.

There are primarily three different types of Airsoft guns based on their mechanism of shooting the BBs.

However, if one wants to know the in-depth classification of these guns, they can check Wikipedia and find out more.

These are operated more like shotguns wherein the shooter has to pull the trigger each time manually before shooting.

They use the potential energy that comes from the spring used in the gun. These guns are incapable of continuous fire like an automatic or a semi-automatic gun.

AEGs are called Automatic Electric Guns. They have a battery operated electric motor which helps in shooting the BBs.

And these guns can easily fire at a muzzle velocity which is between 200 to 500 ft/sec and can shoot between 400 to 1600 rounds per minute.

These are one of the most dangerous class of Airsoft guns out there.

These are the kind of Airsoft guns that can be as real as a lethal, fully automatic gun. These are powerful and more lethal when compared to the AEGs.

These guns have the capability of firing shots fully automatic and will give the recoil and blowback that one experiences in a typical real gun.

These are high precision in nature as well. With modern engineering, these type of Airsoft guns are made for combat training of the military forces and are therefore very powerful and more capable compared to the other types of Airsoft guns.

Can they break a car window?

Maybe yes, maybe no. When you look at all the details mentioned above, you can understand that a typical Airsoft gun used in the Airsoft game and which is permitted by the US government for indoor and sports-related usage cannot do any real damage.

With an average spring Airsoft gun, one bullet can indeed do nothing. Two bullets? Maybe three?

At the most, you will just be causing a crack, but not shattering and breaking the whole car window.

But then, if you consider an AEG Airsoft gun, there are slight chances of causing some serious cracks in the car window upon firing a few rounds. Nevertheless, they still don’t have enough power.

But…if you consider a Gas Airsoft gun which is most commonly used for military and combat training; you stand a chance to damage the car window.

On the whole, if you are persistent and you fire multiple rounds from your AEG or a Gas Airsoft gun, you can be sure that it will break a car window.

These guns aren’t inherently built for inducing damage and mobilizing targets or taking down a moving target; they are made to be played with, in a fun environment.

At the most, they are employed for training. So the chances of these guns doing serious damage by virtue of their design and mechanism are very less.

This YouTube video by eHow does a good job and giving you an overall idea of how powerful these Airsoft guns can get.