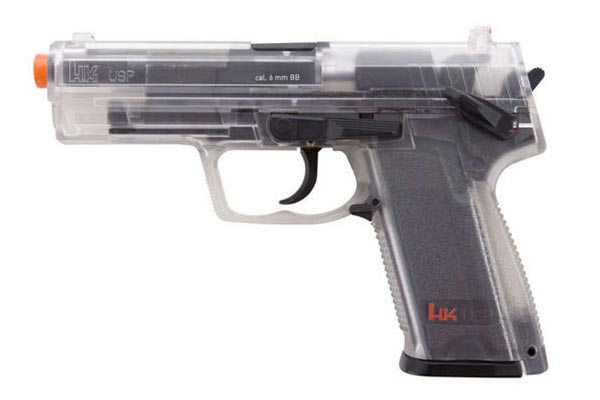 There are three types of airsoft guns that are available today in the market – the gas type, the electric type and the spring type.

Of the three, the spring type is the first to be developed and used. You can say that it is the progenitor of the other two.

In other words, it is the most basic type of airsoft gun that was ever built. But this type still exists today so you can assume that it is still useful and effective.

What Is A Spring Airsoft Gun?

A spring airsoft guns are also called a springer because it uses a spring as its source of power to propel its ammo towards the target.

As such, it works mechanically and not chemically as gas rifles do or electrically as AEGs do.

You need to cock the spring airsoft gun before you fire it just like what you would do with a shotgun. And you have to do it every time you want to take a shot.

To those who are involved in this popular sport, this type of airsoft gun is considered as an entry level firearm.

How Does A Spring Airsoft Gun Work?

According to The Airsoft Guide, there are actually two types of spring airsoft guns. They are the bolt-action sniper rifle and the spring shotgun.

Both these two types are equipped with tightly packed springs. To fire the rifle, the spring is pulled back and then locked into a tiny locking ledge called a recess.

The spring is tightly compressed if you cock the gun by racking the charging handle or slide.

The lug or ammo is locked tightly inside the recess until you pull the trigger. Once the trigger is pulled, the spring is released pummeling the ammo out of the rifle’s barrel at high speed.

If you want to take another shot, you must repeat the same steps by pulling back the bolt or pumping the shotgun’s undergrip.

Answers Yahoo also gives some more details about the how a spring airsoft gun works.

This rifle uses a piston to compress the air behind the BB or ammo and propels it out of the gun’s muzzle.

When the cock is pulled back, the gun places a lug and assumes the ‘gun ready to fire’ position.

If you pull the trigger at this point, the spring will slide forward and propel the BB.

However, you need to cock the gun each time you want to shoot. This could be detrimental if you are engaged in a close-in battle.

If Gas And Electric Are More Popular, Then Why Use Spring Guns?

There are instances where spring airsoft rifles are more useful than gas or electric types.

For instance, you will prefer spring-based rifle if you are playing the role of a sniper in a gun battle.

As a sniper rifle, the spring type has more to offer than the gas or electric types.

The spring-based airsoft gun has more power, speed, and precision. The lug coming out of the barrel of a spring airsoft rifle can attain speeds reaching up to approximately 500 feet per seconds. And it can precisely hit the target better than an AEG or a gas airsoft rifle.

Spring Airsoft Gun Can Be Made To Be Semi-Auto

If you want to have your spring airsoft gun to deliver more firepower, you can modify it so that it becomes a semi-automatic gun.

You need to connect the gear to the electric motor with electric wires to the battery.

Tape the electric wires with plastic cover and connect them to the trigger so that when you pull the trigger, it will touch the end of the battery.

Connect it to also the cock and secure it tightly so it won’t move. When the trigger is pulled, it will connect to the battery which will turn on the motor.

This will then pull back the cock and let it slip afterward. This process will be repeated as long as your finger is pulling the trigger.

What Is Good About Spring Airsoft Guns?

There are a lot of good things that can be said about spring airsoft guns.

Although they are the earliest types of airsoft guns that were developed, they have distinct advantages over the gas and AEG airsoft guns.

1. They are good for kids – as an entry-level gun, spring-based airsoft guns are good for training kids on how to handle guns safely.

According to Howcast, they are perfect for kids of young ages for general firearms training.

They are the cheapest, parents will prefer spring airsoft guns if they want their kids to learn about guns and gun safety.

You are not limited by the charge of a battery since it does not use any battery.

The gun can still fire at will even if there is no gas since it does not use CO2 or propane.

3. As long as the spring is strong and tight, spring-based airsoft guns will fire its ammunitions at greater speeds and accuracy.

This is one of the reasons why they are still being used today by airsoft gun players.

In this regard, you need to watch this short YouTube video. It will show you the basic operation of spring airsoft guns.