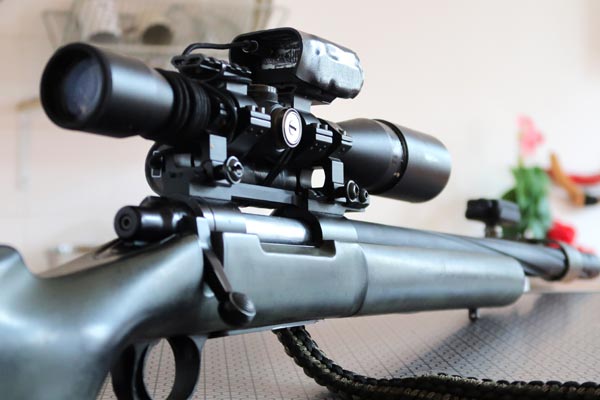 You want to be able to shoot your airsoft sniper farther, faster, and better, right? Then you should be concerned about its hop upsetting.

If your shots are not that accurate, your rifle should be adjusted. This article will show you how to do it, in several ways.

What Exactly Is The Hop Up Of A Sniper Rifle?

Hop up is short of high operation power. If a BB is fired from an airsoft gun it backspins increasing its accuracy in hitting the target.

This phenomenon is called the Magnus effect. According to Airsoft Master, the hop up is typically associated with the device that causes BBs to backspin.

Technically, the main function of the hop up is to increase or decrease the pressure that is applied on the top side of the BB when it is already chambered.

When you pull the trigger to fire a shot, the backspin is created which develops a force perpendicular to the BB. This force pulls the BB upward increasing its effective range.

Why Should The Hop Up Be Set Correctly?

When you purchased the airsoft rifle from the store, its hop up is set at the default setting.

There is a need for you to try the airsoft gun in the field to see if you will be hitting the target accurately at its default setting within the conditions at the field.

Since the default hop up is not set for the actual conditions of the field where you are at, you need to adjust it so that you will be more accurate in hitting your targets.

It is quite possible that your skill in accurately hitting your targets is very high and there is no need for you to adjust the hop up.

However, for most people who are not that accurate, the hop up setting must be adjusted.

This will help them hit their targets more accurately than if they will not adjust the hop up.

In short, by adjusting the hop up, your airsoft gun and you as well, will be more effective in a field match.

Adjusting The Hop Up Is Your First Priority

Wiki How says that adjusting the hop up of your airsoft gun is the very first thing that you need to do before you even think of making any upgrades.

Since it is the device that increases your accuracy, it should be given the first importance.

From the store and into the field, you will find that your airsoft gun either has too much or too little hop up.

If the hop up is more than enough, it will not accurately hit your targets and it may not even reach its maximum range. But if there’s too little hop up, the gun may not function at its optimum level.

Follow these steps in adjusting the hop up of your sniper rifle:

Go to a safe open field away from the general public where at least you will have a 50 feet distance from your target. Set your target about 50 feet away. It should preferably be torso size.

See that everything is safe and fire from two to three shots at the target. Then check the directions of the BBs.

If after checking, you noticed that the BBs are going down, turn the hop up of the rifle up.

You may not be able to hit the target accurately with the initial adjustments. So you will need to make additional adjustments to fine tune the hop upsetting. Just repeat steps three or four until you come to the right hop upsetting.

Step Six: When you are already hitting your target accurately, you have rightly adjusted the hop up of your sniper rifle.

The direction of the BB will be more like a straight line and not be going up or going down.

If you need to adjust the hop up of your sniper rifle, always have your target at a long distance.

Placing your target too close will never give you the right parameters incorrectly adjusting the rifle’s hop up.

Here Are Some More Tips In Adjusting The Hop Up

A player has a problem with his airsoft gun firing in different directions. He is using an L96 with BBs weighing.30 gram.

A Reddit contributor offered his solution saying that if it is an L96, it should be equipped with a VSR style hop up.

He says that the adjustment of the hop up should be on the barrel’s left side. It is in the upper receiver, right in front.

If the gun owner wants to be consistent, he recommends for him to upgrade the gun’s barrel.

Answers.com gave a different answer to the same question. This website recommends for the L96 owner to adjust the little slide on the hop up device of the gun.

It also encouraged the owner to read the gun’s manual for instructions on how the hop up should be adjusted.

Instructables offers a different suggestion on how the hop up should be adjusted.

This website recommends for the airsoft sniper rifle owner to buy .20 gram glow in the dark BBs, and then to do target practice in the dark, and check the directions where the BBs are going.

By watching the glowing BBs, the rifle owner will be able to see how far they are going before they curve and go in different directions.

Then the hop up must be lowered slowly each time until the BBs begin dropping down rather than veering off in different directions.