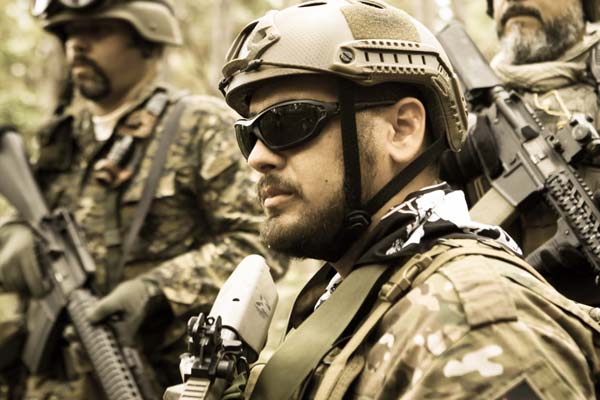 You just got your first airsoft M4 assault rifle, a couple of batteries, and some BBs to go along with them.

You’ve seen videos of people dressed up as soldiers of different nations battling it out on large fields where trees, bushes, and abandoned structures dot the landscape.

As soon as the game master calls off for the round to start, people are rushing at each other and BBs start flying everywhere.

Sometime later on a different game day, you play with a group of friends that are sporting gear that completely differs from the weapons and equipment that you have.

After a lengthy conversation, some of your friends tell you that they play Milsim in a field that supports 200 players or more.

Your mouth gapes wide open as they tell you their experiences and you’re processing the information they’re giving you.

Think you wanna try out Milsim? Let’s talk about the simple stuff first and what makes them different from each other.

Airsoft vs Milsim: The Basics

Airsoft is a quasi-combat sport whose origins date back to the 1970s/1980s in Japan. It was a response to the need for recreational shooting which is almost impossible due to Japan’s strict gun laws.

The wow factor of the game involves the use of weapons that are based on realistic firearms, and are operated by military and government agencies worldwide.

Airsoft guns typically have a rate of fire between 300-400 fps (feet per second) on average. They span multiple categories just like their real-life counterparts, including pistols, submachine guns, assault rifles, and shotguns.

They are further split into three additional category types that describe how the BB is fired from the gun: airsoft electric gun (AEG), gas blowback (GBB), and spring guns.

Games that are played in airsoft usually revolve around team deathmatch in which one team of players have to eliminate the other team in order to achieve victory.

Think of it as a form of tag in which you’re moving from place to place ‘hitting’ others while not getting hit at the same time. Rounds usually last between 5 to 15 minutes.

For the most part, it’s a fun experience that can be enjoyed by both children and adults. Players will get the chance to feel the tension of engaging in ranged combat without potentially getting killed by live bullets.

Milsim, on the other hand, is something of a different animal. It is an abbreviation for military simulation, which serves as a variant of airsoft meant to re-enact modern battles in a realistic fashion.

They typically involve hundreds of players utilizing equipment and loadouts that are meant to be realistic just like real-life operators within military and law enforcement agencies.

Games for Milsim game often last for a period of 2 to 3 days. This is due to the fact that the games are played in a campaign-like fashion where you’ll have to complete a series of objectives during the course of the event to achieve victory.

You will need to work in concert very closely with your teammates in order to complete your objectives and succeed.

The fields themselves will annotate to players via their website or social media outlets if they’re able to support Milsim or not.

Airsoft Megastore has a listing of specific game types that have been used across the country.

The differences between airsoft and Milsim lay in the complexity of the games and the mentality that the players bring with them into the games.

Airsoft is more or less a step up from paintball, where the games typically fall along the lines of your typical run and gun in a similar fashion to Call of Duty.

Milsim takes the airsoft hobby a little more seriously, designed to emulate how the men and women from both the military and law enforcement agencies operate in a hostile environment.

When it comes to the attitudes of the players themselves, they will also determine the gameplay experience.

Are you the type that likes to run and gun players with the mindset to score as many kills as possible? Or are you the methodical type that is resourceful based on the limited amount of equipment you have?

The composition of the players within airsoft will have varying degrees of experience. When it comes to public games in airsoft, new players will have little grasp of certain expectations that are laid upon them before the gameplay starts.

They have no concept of tactics, communication, and teamwork that is typically required in Milsim to succeed unless the players have trained with each other on a regular basis.

Experienced airsoft players will have developed those skills over time through consistent play. New players can work with veterans of the game to develop the proficiencies necessary to be a competent shooter and survive with their teammates.

Milsim generally has experienced players, of which the games are meant to replicate the operational mindset of the US Army’s Military Operations in Urban Terrain (MOUT) manual, and teaches the fundamentals and skills necessary to work within an urban environment.

They often have experience in communication, teamwork, leadership, coupled with skills and techniques necessary to succeed in any Milsim game.

When it comes to Milsim also has a greater level of organization that’s required which airsoft games in general lack.

Just like the military, the teams that comprise larger teams would be squads of 11 personnel total, each individual operative fully equipped with their own personal kit and comprises the totality of firepower the squad is capable of.

They are the tip of the spear of any operation and are ultimately responsible for its failure or success.

In Milsim games, there is also a certain expectation in terms of honor. No, I am not talking about the rules of airsoft in general, I am talking about the tendency for airsoft players to disrespect the operators they are trying to imitate.

Active duty military and law enforcement units will oftentimes call out these charlatans for inaccurately representing them out in the field.

For the people who actually serve in these agencies, it’s a matter of pride within the service. Their mentality is that the people who are posing/cosplaying as they haven’t earned the right to wear some of the devices that are donned on their uniforms.

The Havok Journal published an article last year as to why some veterans hate airsoft that you can read here.

The U.S. Marine Corps also offers its own iteration of the MOUT training manual which can be accessed here.

It’s dry reading but if you’re looking to try out Milsim, it provides the knowledge and fundamentals necessary to mentally prepare you for the challenges the games themselves will pose.

Possibly one of the ultimate expressions of airsoft as a sport, speedsoft (aka speedQB) is another variation of the airsoft hobby in which players run around with only the bare essentials, usually consisting of primary and secondary firearms along with usually one to two spare magazines for each.

Their personal clothes are usually minimalist as well, whereas instead of donning military-style fatigues, they have a stylized T-shirt a long sleeve undershirt, sneakers, gloves and a dyed mask that protects the entire face.

Speedsofters are possibly the most casual of players in terms of attitude but play aggressively. It is not meant to be completely realistic and plays airsoft in some of the most absurd ways imaginable.

I’ve personally played with people who played airsoft like paintball running around with nothing but Tokyo Marui Hi-Capa pistols out in many CQB fields during my time in Japan, and my personal experiences with them, in general, is something of a mixed bag.

Dealing with speedsofters require even greater patience than regular airsoft games due to the pace of speedQB matches and the swiftness of the players themselves.

Playing speedsoft in-field is more of a snap-judgment playstyle that requires you to be constantly on the move and forces you to react quickly constantly. If you’re the kind of player that doesn’t like this style of play, speedsofting isn’t for you.

Accessorize: What Should You Bring With You?

When it comes to the gear to general airsoft games, players will bring different weapons with them as a reflection of their personality.

The most basic is arguably the M4/M16 platform, which is used by the U.S. Army, Marine Corps, FBI, and other agencies within the military and law enforcement apparatus. It’s easily the most recognizable assault rifle and also easy to operate.

Choosing a weapon is a matter of preference and your playstyle in-game. Players will often choose weapons based on the aesthetics of the guns themselves and how comfortable they are with using them.

Milsim games will require a little more dedication plus some extra money to spend.

Some of the things that you will need to spend on maybe equipment that you already have in your personal inventory for standard airsoft games.

This includes battle dress uniforms that blend with the local terrain, communications equipment, first aid kits, and other items that may be required for your games.

Which Should You Do?

I would personally recommend that you learn to play airsoft first before you opt to go into Milsim. Certain habits that airsoft players have to tend to get in the way of Milsim play.

By that same token, playing airsoft will give you a grounded foundation that can help you intuit certain situations when you’re playing infield.

When working with veteran players, take a look at their weapons and see if there is anything that can be added into your own kit.

They could be simple items like flashlights, lasers, tactical radio and headset for field communications, and so forth. If they’ve participated in any Milsim events, don’t hesitate to ask pointed questions in order to learn from them.

Keep in mind that in a lot of fields, airsoft matches often tend to be casual in their games, and the players that comprise the customer base of each field will have varying degrees of experience.

Just because a dude is wearing military-style fatigues doesn’t necessarily mean he’s an experienced player in the field.

In closing, whatever airsoft games that you choose to play is ultimately up to you. Do you like to play casual games without having to take too deep a dive into spending money on a bunch of guns and gear that you may not have the time to use regularly?

Milsim is designed for people that like realism in their games and have what it takes in order to live through the play experience.

Choosing to play either airsoft or Milsim boils down to personal tastes and preferences, along with how much you’re willing to commit to the hobby.

If you’re an airsofter that plays regularly while periodically upgrading your weapons and gear, there’s no reason not to try out both.

I’ve included some Youtube video links that provide some additional context on the differences between general airsoft and Milsim.

Airsoft vs Milsim …… What is Airsoft?

AIRSOFT vs Milsim: Perspectives & Evolution as a Player