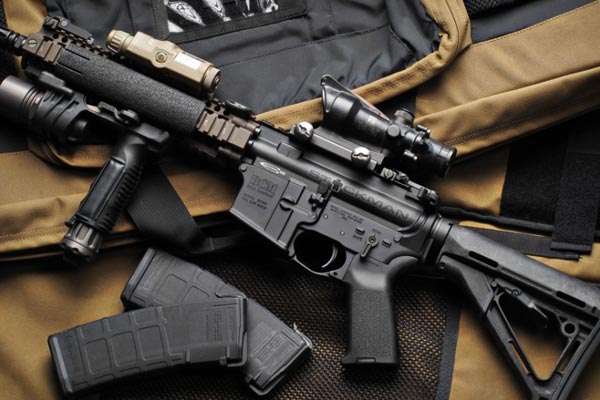 Can an airsoft gun kill? Yes, it could if you really intend to kill someone. According to an anonymous source, even if an airsoft gun can’t really kill people, it can be used to kill if you point it to someone and fire at him successively like 10,000 times in one minute.

But you won’t have the chance to do it because there are certain rules in playing with airsoft guns.

They are typically used in legitimate and authorized playgrounds or fields where at least two teams are pitted against each other to claim a prize or an objective.

But What Are Airsoft Guns Really?

Airsoft guns are only used for sports. That means they are only for the purposes of playing games and not for killing people or hunting and killing animals.

They are actually expensive play toys that are replicas of real guns and that use a different kind of ammo instead of real live bullets.

According to Wikipedia, these toy guns are very low-powered non-lethal weapons intended to fire spherical non-metallic projectiles which are commonly called BBs. These BBs are usually made of biodegradable resin or plastic materials.

The ammos of airsoft guns are considerably less damaging than real bullets. They have less penetrating power and can be easily stopped compared to typical airguns.

In this way, they can be safely used in recreational and competitive sports. Even then, wearing proper gear is required.

Being toy guns, airsoft guns can be made to look as if they are real firearms. As such, they can be difficult to distinguish from real guns, even when they are marked with the required orange tips.

However, with its technical design, it is impossible to convert them into real guns.

Here is a YouTube video that will show you how an airsoft gun works. Be sure to watch it in this link if you want to know how they work, the parts of an airsoft gun that make them work and some basic precautions you need to take in using them.

What Are The Rules For Playing Airsoft Guns?

Whether it is real or just a toy, there is always an element of danger with guns. Therefore, airsoft guns should also be treated with care.

What’s good about them is that they can be tools to teach gun safety to the public.

According to the SkyAboveUs website, there are certain rules that you need to understand and follow before you are allowed to play with airsoft guns. These rules are:

1. Never point a gun anywhere. Point the gun only when playing a game.

2. Don’t look down the barrel of the gun.

3. Treat the airsoft gun as if it is a real gun

4. Always assume that the gun is loaded

6. Don’t release the safety gear of the gun until you are ready to shoot

7. Don’t put your finger on the trigger of the gun until you are already aiming at your target and are about to shoot.

8. Shoot your airsoft gun only in authorized playgrounds or fields

Following these rules carefully will make you a safe real gun owner. In fact, some people, even children, have developed into mature and safe individuals when they carefully followed these rules.

Observing these rules will make the sport safer and more fun for all those involved.

Are There Laws Regulating Airsoft Guns?

In general, airsoft guns are considered safe. According to Tactical Airsoft Magazine, since they resemble real guns in appearance and operation, there are certain laws that the government uses to regulate their manufacture, importation, and ownership.

There are countries which even treat the possession of airsoft guns as illegal. These countries include Malaysia, South Korea, and Singapore.

In Canada, it is prohibited to import these toy guns. According to Airsoft Dome website, they are banned in Australia.

In the United States, the federal laws are different depending on the state. Since airsoft guns closely resemble real guns, possible disastrous results can happen.

That is the reason for some states to prescribe some regulations for these toy guns.

Buyers and users are therefore advised to be aware of their state laws regarding airsoft guns.

What Are The Authorized Places Where Airsoft Guns Are Played?

As have already been mentioned, laws regulating the use and ownership of airsoft guns vary from state to state.

Therefore, it is advisable to refer to your state law as to where you can safely use it. It would also be for your own good if you will exercise certain precautions.

There are replicas of airsoft guns that have the same high calibers as real guns, therefore, it is understandable that they shouldn’t be used just about anywhere.

But there is one thing that is really required: Parents should always supervise their children when they are playing airsoft guns anywhere.

Can You Own Your Own Airsoft Gun?

Again, this will depend on the airsoft gun laws of the state where you live. For instance, in Arkansas, the use and possession of any kind of airsoft guns are prohibited.

But in California, their use and possession are regulated by Senate Bill No. 199. This bill prescribes a minimum age regulation for the possession of airsoft guns which is eighteen years old.

According to Tactical Airsoft Magazine, in New York City, no person below sixteen years old can own an air gun or air pistol.

If a person is allowed to have them, the replica guns should be coated with plastic and covered with bright colors.

The use and ownership of airsoft guns are regulated by the city’s Article 39-B Imitation Weapons.

In Washington DC, you cannot discharge an airsoft gun when you are in a public place, or if the safety of another person is at risk.

According to Washington DC laws, replica guns are considered illegal. It is therefore important for you to check the laws of your state before thinking of buying or using airsoft guns.